From FlyBase Wiki
Jump to navigation Jump to search 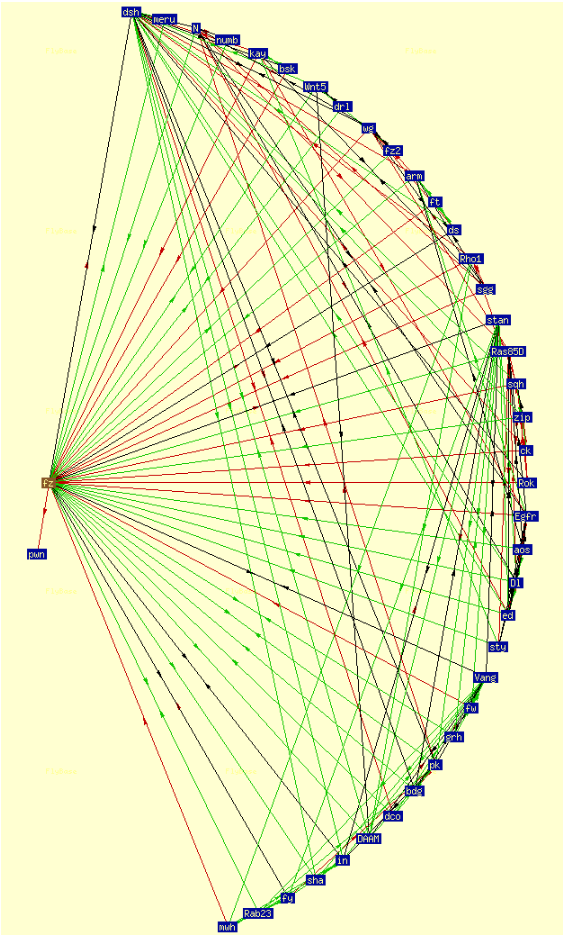 In both the gene and allele interaction networks the query itself is shown in brown, and the genes or alleles that directly interact with the query are shown in dark blue. The genes and alleles that interact with the directly interacting ones (i.e., two steps away from the query node) are shown in light blue. Lines connecting nodes are colored to represent enhancement (green) or suppression (red) or both (black). The arrow’s direction shows the direction of the interaction: e.g., A ---> B means that gene A enhances/suppresses gene B.

Please note: A diagram drawn for a gene is based on the data of all alleles of a gene, which may include antimorphic and neomorphic alleles, so it should be interpreted with care.

The tool accepts a FlyBase gene or allele ID, and valid gene symbols (e.g. "fz") or allele symbols (e.g. "fz[15]", where the allele superscript is placed in square brackets). Please note, the search box is case sensitive, so it is important to enter "dpp" rather than "Dpp".

You can choose to display the data on enhancers, suppressors or both categories of genetic interactions. Alternatively, you can display physical interactions for that gene.

Alleles of genes, such as sca[Scer\UAS.cEa], and fusion genes, such as btl::Egfr[Scer\UAS.T:lambda], that have been introduced into flies are not shown by default but can be added to the diagram.

The "Limit to" function shows you a list of the controlled vocabulary terms that have been used to annotate the interactions of the alleles of the gene, or the allele, you specified as your query. If you select one of the terms the diagram will only include interactions of the alleles of your query which have been annotated with the term. Thus, for example if you enter the gene symbol "dpp" and choose eye in the "Limit to" box, and then click on the "Show Interactions" button to update the diagram, you will see a picture showing the genes which have an allele that interacts with a dpp allele to alter an eye phenotype.

This select box allows you to redraw the picture at a different angle to improve the layout of the network on the page. Choose a new angle and click on "Show Interactions" to redraw the diagram.